Nobel laureate Jean Tirole spoke to the Neue Zürcher Zeitung in the margins of the UBS Center Forum for Economic Dialogue earlier this month. Read the translated interview below to discover Mr Tirole’s views on COP26, emissions trading, nuclear power plants as well as his suggestions for tackling climate change.

The following interview by Christoph Eisenring and Peter A. Fischer was first published in NZZ, 11.11.2021. Translated and edited by the UBS Center, with permission.

The French economist Jean Tirole sees gigantic events like the one in Glasgow as unsuitable for driving climate change action forward. He advocates a climate club of the willing. Poorer countries should be brought on board through the generous allocation of emission rights.

Climate activist Greta Thunberg has called the Glasgow Conference a failure. When would you consider the conference a success, Mr. Tirole?

When there are almost 200 countries at the table, it is very difficult to build consensus. Everyone has a veto. The oil states, for example, will resist putting a price on CO2 emissions. Conferences like this keep the dialogue going, but more is needed, namely a climate club of the willing.

What do you mean by that?

A coalition of the willing could start with Europe and the US and then exert pressure on other countries. Nevertheless, getting the big emitters China, India, Russia, and Brazil to join in remains an enormous challenge.

Recently, almost 140 countries agreed to introduce a global minimum tax on corporate profits. Why doesn't something like this succeed in climate change action?

With the minimum tax, many countries receive slightly more tax revenue while others avoid double taxation, which would be a real risk without an agreement. When it comes to climate action, on the other hand, the winners are future generations that are not sitting at the table today. And the countries that don't participate win when everyone else reduces CO2.

This free-riding can lead to the erosion of cooperation between states. How can we ensure more cooperation?

I am a member of an advisory panel to French President Emmanuel Macron. In it, we were also asked to comment on a CO2 border tax. This would make imports from countries that do not pursue an ambitious climate policy more expensive. Economists actually dislike such taxes because it is very difficult to determine the CO2 content of imports. Moreover, trading partners could interpret such a measure as protectionism.

So you are against such a CO2 border tax?

If Europe has a meaningful CO2 price, this could lead to a sharp shift in industries in countries with less stringent climate protection. That's why such a tax is needed, even though I'm not a fan of it. The main purpose of such a CO2 border tax is to put pressure on other countries to become more involved in climate protection.

Wouldn't it be enough to condemn countries that don't participate?

This has been done since the first major climate conference in Kyoto, Japan, in 1997. Has it made much difference? Countries always find an excuse. The fact that the US under President Trump left the Paris Agreement was a problem primarily because it gave other countries an excuse to do nothing themselves.

In Switzerland, we often hear that we only contribute 0.1% to global CO2. Why should we make an effort?

I know the exact same argument from France. We emit less than 1% of the world's CO2, why should we reduce? Well, you can lead by example, as the EU did with emissions trading after the Kyoto Conference in 1997. However, hardly anyone followed the EU's lead. One would have to at least secure the US to join a climate club, but President Biden is afraid to even utter the word CO2 price.

Can we solve the climate problem at all without a substantial CO2 price?

A substantial CO2 price is necessary, albeit insufficient. We also need much more research in the environmental field. We have suggested to the French President that Europe should set up a counterpart to the American Advanced Research Project Agency (Arpa) for energy. We should also make the technologies researched there available to the poorer countries.

Now there is already a commitment from developed countries to provide developing countries with $100 billion a year for green projects. Is this going in the right direction?

Would that mean that we would have to compensate both China and India too?

Yes, it's tricky. That's why I propose that instead of transferring money, countries should be allocated rights to emit CO2. Something similar has already been done with the reduction of sulphur dioxide in the US in the 1990s.

What was the problem?

The West and East Coasts wanted clean air, but the coal mining states in the Midwest had to be persuaded. The negotiations lasted ten years, but in the end the coal mining states were allocated a particularly large number of emission rights, which they were able to sell. CO2 emissions in the US were quickly cut in half. I'm sure it will be easier to convince someone in Texas to give emission rights to India instead of money.

How should these emission rights be distributed?

You would define an emissions path to limit global warming to 1.5 to 2 degrees by the end of the century. The tons of CO2 would then be distributed among the countries. The poor countries could then sell theirs to the richer ones. Granted, measuring emissions would not be a simple task.

Which is the instrument of choice in the fight against climate change: a CO2 tax or emissions trading?

I prefer emissions trading because monitoring is simpler. In principle, a country's emissions can be measured. Apart from in Sweden and Switzerland, there are hardly any significant CO2 levies today. I therefore don't believe that countries would actually implement them. You can't force a country to levy a tax.

According to Nobel laureate William Nordhaus, a temperature rise of 3.5 degrees Celsius optimizes prosperity. Accordingly, 1.5 or 2 degrees is too ambitious. How do you see that?

I'm really not an expert on this. If the scientific consensus is 1.5 or 2 degrees, then I'll go with that. But Nordhaus is right when he points out the trade-off: the more ambitious our climate targets are, the more expensive they will be in the short term.

You are in support of global emissions trading, but realistically you should start with a climate club of the willing, which would be difficult without the US. That doesn't sound very optimistic.

In France, 90% of people say that climate change must be taken very seriously. At the same time, however, just as many citizens say that no one in the middle class or below should pay even one euro more for climate action. The discrepancy between awareness of the problem and willingness to do something is huge.

Might people be more persuaded by pointing out that a country has a competitive advantage if it acts first?

I'm very sceptical when politicians promise lots of green jobs. If it were that easy, they would have existed long ago. You also have to be aware that all the money we spend on the energy revolution is unavailable for other uses, such as education or health. And jobs would have been created in these areas as well.

There is a strong "degrowth" movement among young people that sees economic growth as the main cause of climate change and therefore rejects such growth.

But if you were to ask young people whether they are in favor of their parents' income falling by 5% every year, you can imagine the answer. It's a different thing if the growth is lower for a time because we want to protect the planet. That makes it worthwhile.

Danish publicist Bjørn Lomborg says the world economy should continue to grow at 2% a year. In 2100, we would have five times the income we have today, a small part of which could be diverted to adapt to climate change. What do you think of that?

And then do we all move to the same places that are still habitable? Migration will increase sharply if we do nothing. Poor countries will be resentful for good reason. And wealthy ones simply won't want all those people migrating to them. It's a time bomb. If you do nothing for a year or two, there's nothing wrong with that. But if doing nothing accumulates over years, there will be huge consequences.

Could the chances of an international agreement be improved by allowing poorer countries to adopt a lower carbon price than industrialized countries?

Transfers to poorer countries are better than having different CO2 prices depending on the country. If India sets a CO2 price of only €5 per ton of CO2, the country will continue to invest in coal-fired power plants. But decarbonization will not succeed that way. Instead, it would be better to give them emission rights. They will then have to consider whether to continue investing in coal or whether they would rather turn the rights into cash.

The yellow vests in France and the rejection of the CO2 law in Switzerland show that citizens do not think much of incentive taxes.

Citizens apparently have no trust in the government that the money will actually flow back to them and not seep away in the state budget. The way out would be an independent institution entrusted with reimbursement. There may be better ways than giving everyone the same amount. Residents of peripheral areas could be compensated more than city dwellers.

It may come as a surprise, but the US is leading the way here with the aforementioned Arpa for Energy, which was established under President Obama. In Europe, by contrast, the influence of lobby groups is far too strong with regard to these kinds of projects. An industrial policy could only work if an independent authority with technocratic leadership were to be created.

In France, 70% of electricity is produced with nuclear power. But now people in Europe are arguing about whether nuclear power is a green energy or not.

There is no choice at the moment. We have to stick with nuclear power if we want to decarbonize the industry. Just look at Germany: The CO2 content of the electricity produced there is much higher than in France – even after the country invested billions in renewable energies. Berlin is shutting down nuclear power plants, but still has a comparatively large number of coal-fired power plants on the grid. That doesn't sound like a good policy.

Nobel laureate Jean Tirole spoke to the Neue Zürcher Zeitung in the margins of the UBS Center Forum for Economic Dialogue earlier this month. Read the translated interview below to discover Mr Tirole’s views on COP26, emissions trading, nuclear power plants as well as his suggestions for tackling climate change.

The following interview by Christoph Eisenring and Peter A. Fischer was first published in NZZ, 11.11.2021. Translated and edited by the UBS Center, with permission.

The French economist Jean Tirole sees gigantic events like the one in Glasgow as unsuitable for driving climate change action forward. He advocates a climate club of the willing. Poorer countries should be brought on board through the generous allocation of emission rights. 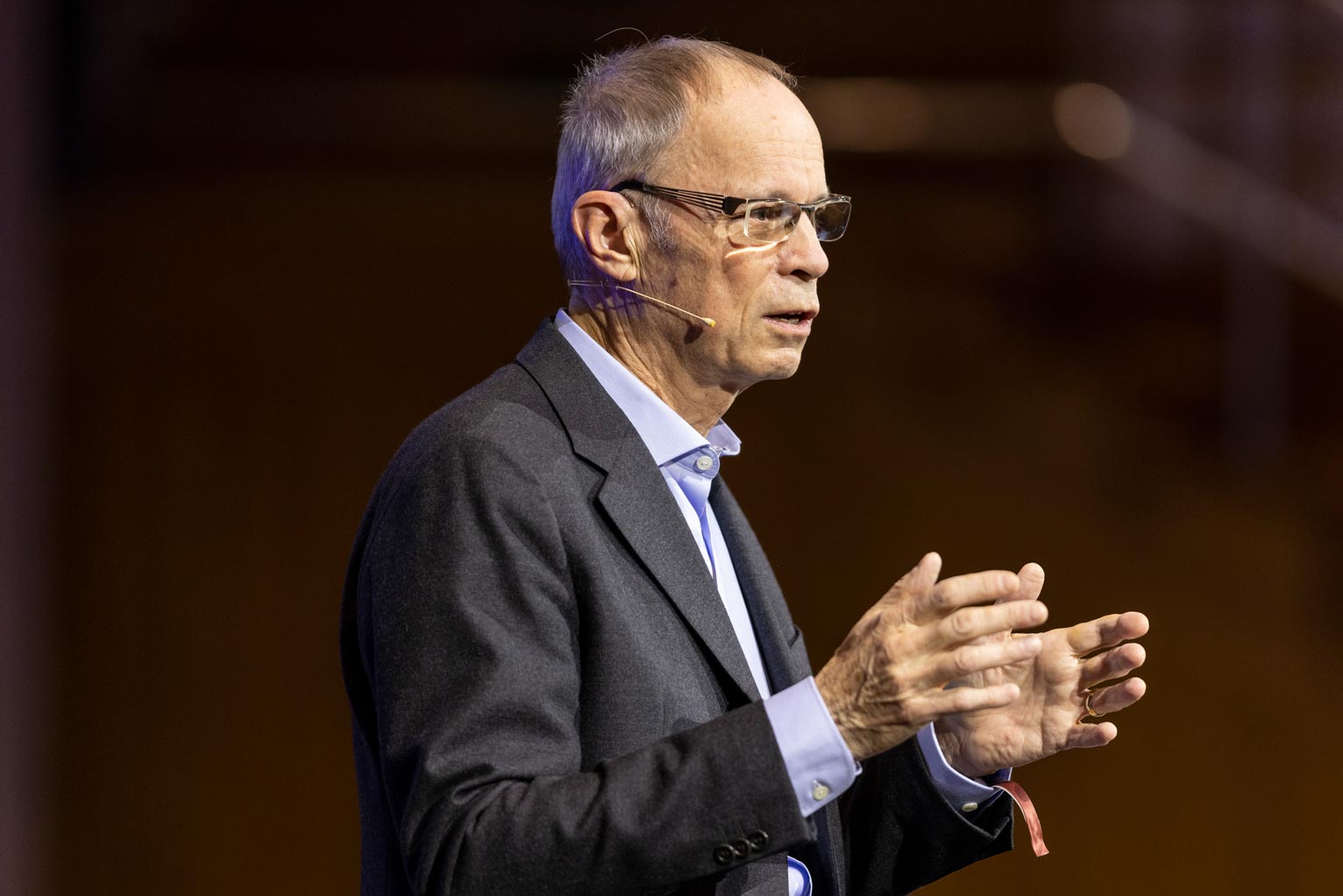