However, this ratio was reversed for once in the Center’s last Opinions event: 0:5. To quote Dina Pomeranz, holder of the Professorship for Microeconomics endowed by the UBS Center: “This is the first time that I’ve been at a professional event consisting of an all-female panel. Interesting to notice the effect it has on me.”

The event, entitled “Utopie Gleichstellung? Vom Wunschdenken zur Realität” (Utopia equal opportunities? From wishful thinking to reality), was organized in cooperation with OEC Alumni UZH and UZH alumni informatik. Unlike many other discussions on gender equality, the question was not if equality can be achieved, but how. The distinguished speakers represented academia, politics, and the business sector, and came with a wealth of experience and knowledge on the gender topic.

Current political processes have put gender equality at the center of public attention – such as the midterm elections in the U.S., the federal elections in Switzerland, or the “Helvetia ruft” movement. However, ensuring equal opportunities remains a difficult task for politicians, regulators, academic researchers around the world and, last but not least, also for the corporate world. UZH alumna Iris Bohnet, Albert Pratt Professor of Business and Government at Harvard Kennedy School, addresses this issue in her book What works – Gender equality by design. She presented her research in the opening keynote lecture.

Bohnet declared that gender equality is a moral and a business imperative. Yet, unconscious bias prevents us from achieving gender equality, and debiasing individuals’ minds has proven to be difficult and expensive. With an impressive example of an optical illusion – the checker shadow illusion – she caught the attention of the audience and proved with this simple example how biased everyone is; this also applies to organizations. Behavioral design helps debias organizations. Bohnet presented research-based tools to move the needle in classrooms and boardrooms, in hiring and promotion, benefiting businesses, governments, and society. Bohnet is convinced that the best solutions can only be achieved if 100% of the talent pool is used, and not just half of it.

The panel following Bohnet’s keynote featured four panelists with very different backgrounds: Iris Bohnet was joined by Gabriele Siegert (UZH deputy president), representing academia, Jacqueline Fehr (state councilor of Zurich) representing the political world, and Mara Harvey (UBS Wealth Management) representing the business world. Unsurprisingly, all panelists agreed that diversity is good for successful teams and organizations, no matter which world they represent. Thus, fostering diversity – and specifically also gender diversity – should be in every organization’s best interest. Identifying the mechanisms which undermine equal opportunities, however, is often as challenging as defining solutions. For Mara Harvey, looking at the underlying mechanisms also involves taking an outside-in perspective, e.g. looking at female clients and their needs. As a matter of fact, economic data like consumer data is mostly gender blind; however, reliable genderspecific data allows us to better identify the needs of female clients, for example. Moreover, combining the financial industry with gender, Harvey revealed that the origin of inequality starts as early as in childhood. Indeed, new research shows that the gender pay gap starts already with pocket money. For Harvey, this demonstrates that equal opportunities are a question of fairness.

Fairness and equality are also values that Jacqueline Fehr has stood – and fought – for in her political career. For her, biases and stereotypes are the main counterforces that we need to address to reach equal opportunities. Clearly, there is a need for more female role models. As long as there is only a handful of women in any organization or institution, they stand out as exceptions. Bohnet quantified this: she considers a threshold of 30 percent women to be a critical mass; if there are fewer than 30 percent, individuals will not be considered as a representative group but only as exceptions. Therefore, role models must exist in a certain quantity, concluded Fehr.

Gabriele Siegert illustrated the discussion with several examples on how bias and stereotypes work in academia. She made it clear: everybody is biased, men and women. Humans generally overestimate themselves and are reluctant to admit being biased. But research shows that many decisions are based on a personal bias and not on quantifiable performance.

Bohnet provided an example from hiring processes: Research shows that as soon as a CV permits to derive a candidate’s gender (e.g. based on the name or a photo, as it is still common in Switzerland), the selection criteria for CVs becomes strongly biased. This example shows that even small changes can make a difference. This is also true for micro sponsoring – a tool, but also an attitude, introduced by Iris Bohnet, reflected in small acts of support provided day to day to each other. Why not support a minority in a discussion, challenge someone’s opinion, or start with yourself: scrutinize your first impression and be aware of biases.

PS. Back to the numbers, with which we started this contribution: we know, they are not great, but they have improved and we continue to work on them.

However, this ratio was reversed for once in the Center’s last Opinions event: 0:5. To quote Dina Pomeranz, holder of the Professorship for Microeconomics endowed by the UBS Center: “This is the first time that I’ve been at a professional event consisting of an all-female panel. Interesting to notice the effect it has on me.” 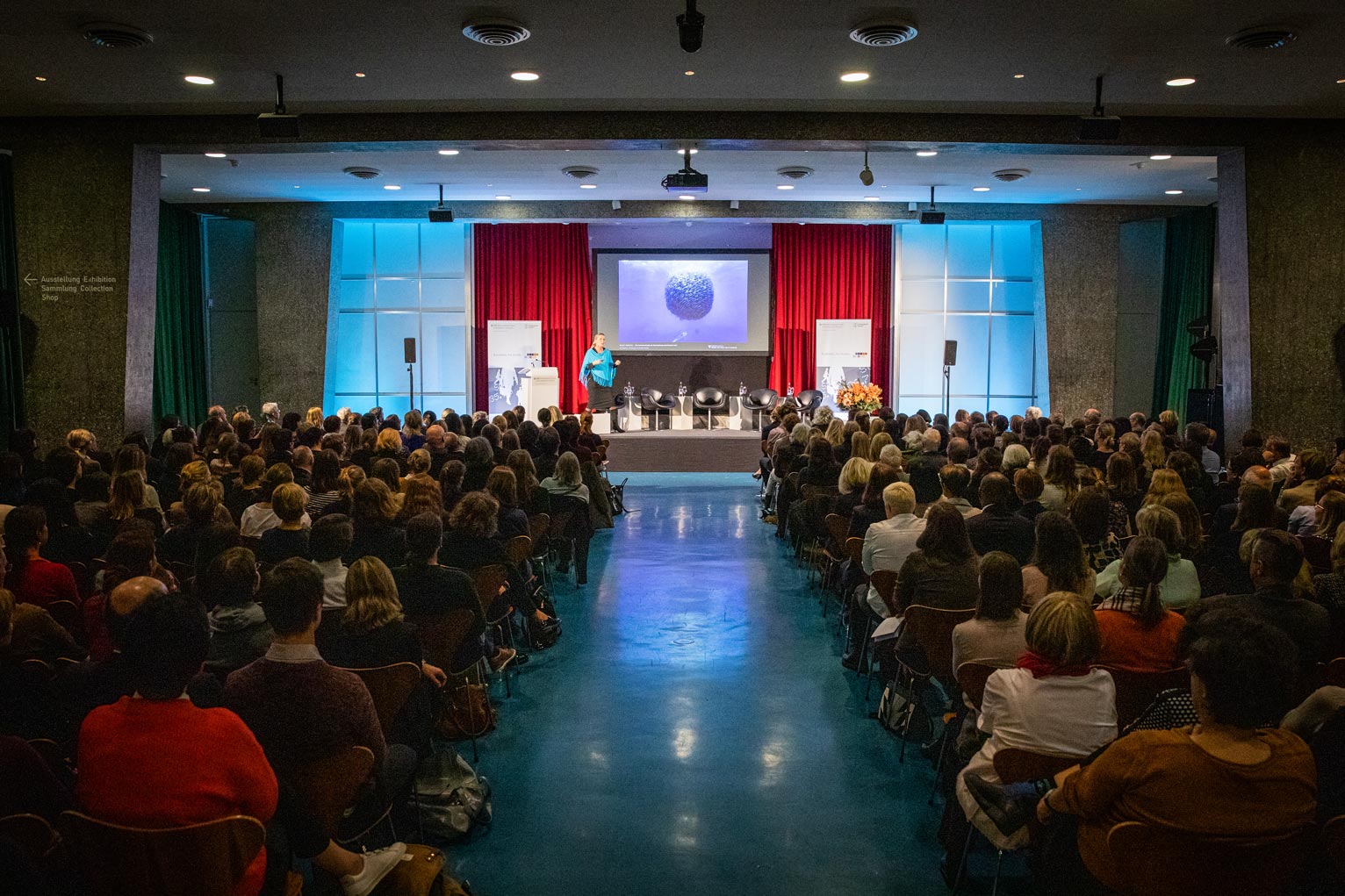 Bohnet declared that gender equality is a moral and a business imperative. 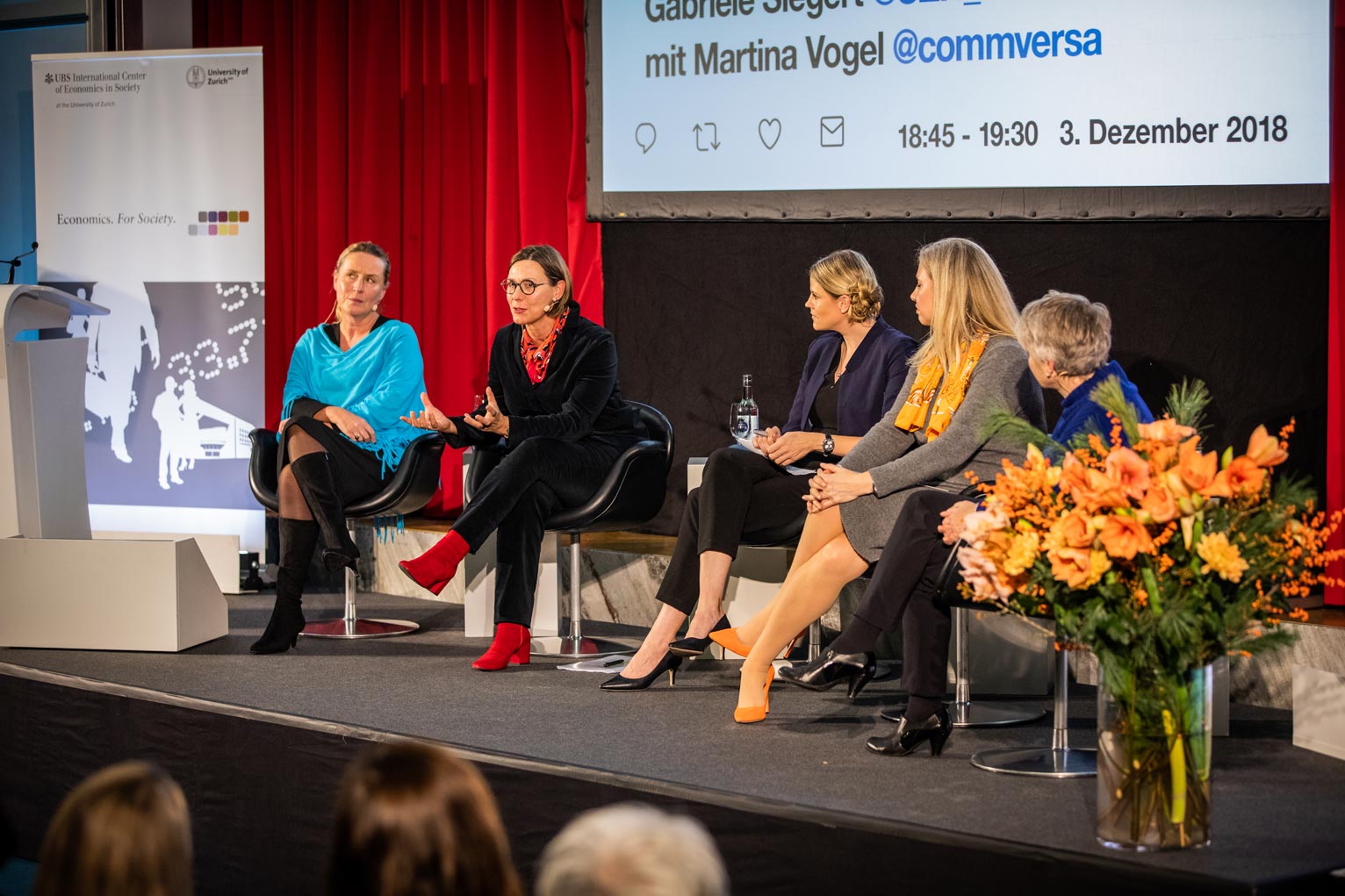 Like Iris Bohnet (far left), Gabriele Siegert (second from left) stressed that all people are biased, men and women. 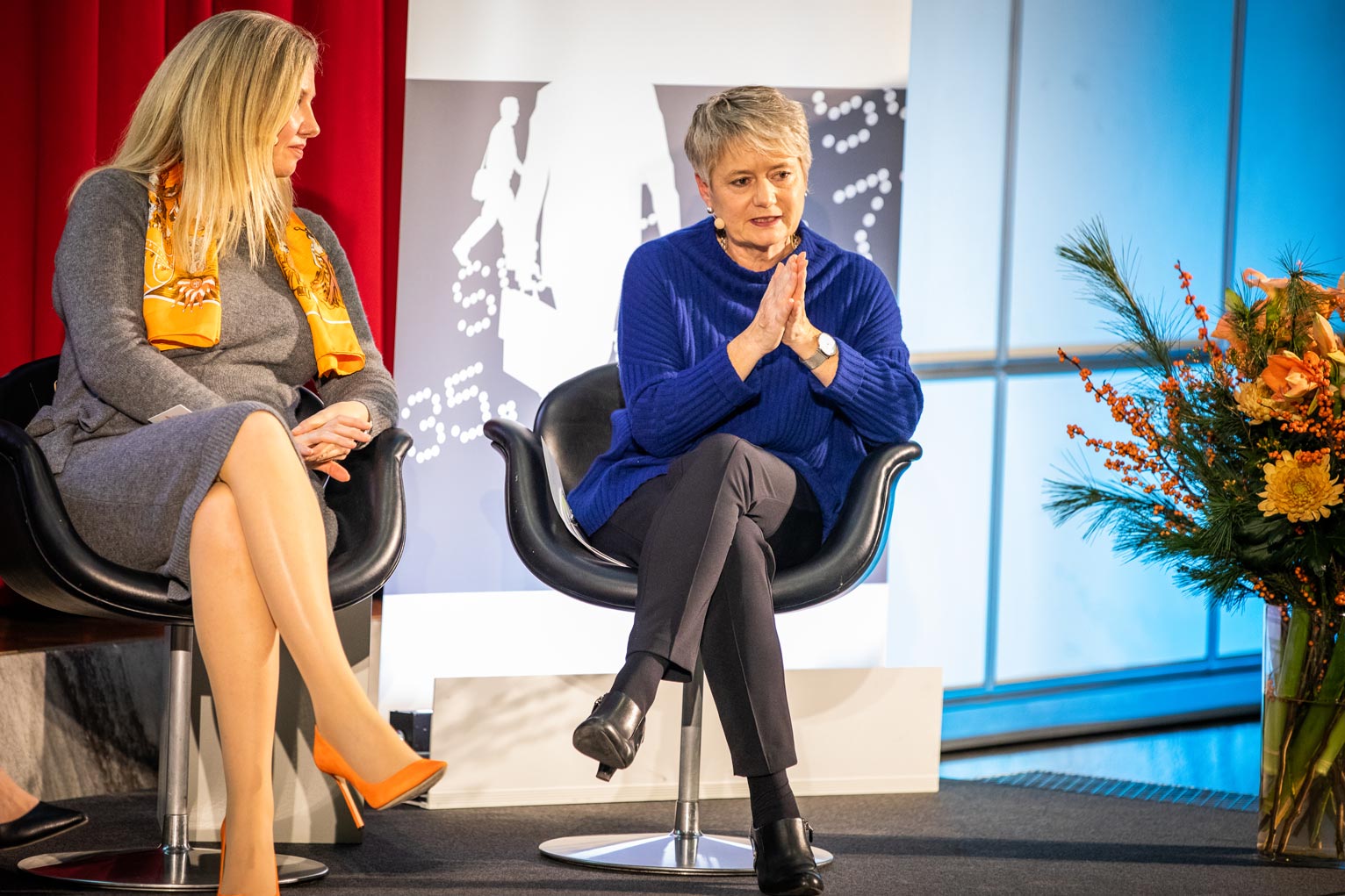 Fairness and equality are values that Mara Harvey (left) and Jacqueline Fehr both have stood for in their careers.