The paradox of profit

Monopolies lead to high prices for consumers, low wages for employees - and excessive corporate profits. The tech giants are a prime example of this development. Economist Jan Eeckhout explains how this came about and what can be done about it.

This interview by Philipp Löpfe was originally published in German by Swiss daily «Watson», 12 November 2022. Translated and edited for layout purposes by the UBS Center.

"The Paradox of Profit" is the name of your bestseller. Elon Musk currently seems to be the perfect embodiment of this thesis. Or isn’t he?

My thesis does not refer to individuals. My thesis relates to the new wave in the tech sector. The so-called scale effect, the fact that something becomes cheaper the more of it you can produce, has led to this development, especially in digital technology.

Are you also alluding to the so-called network effect, the fact that a network becomes more valuable the more participants it has?

Yes, in this environment, tech companies are doing exactly what their shareholders expect them to do. They are maximizing their profits. That's why you can't reduce this phenomenon to Elon Musk. Rather, it is about what the government and regulators fail to do. If monopolies are allowed to exist, then this opportunity will be seized. We must therefore prevent these monopolies from emerging and exploiting customers and employees.

Maximizing profits is to capitalism what bacon is to hash browns. It is not a new concept. But why have profits exploded in the last three decades?

Lack of regulation is certainly one reason. However, the main cause lies in the development of technology. In the digital world, it takes a lot of capital to establish a business field. Once you have done this, however, you can expand the revenue almost indefinitely without any costs thanks to the economies of scale mentioned above.

That's a good thing for consumers, too, isn't it?

That is so. But it also facilitates the formation of monopolies. That's why we're in a dichotomy: It's great that we have these companies, but they have to be regulated.

Peter Thiel, a former business partner of Musk, made the case in his book "Zero Not One" that competition is for losers. Yet Thiel is, or at least was at the time, an ultra-capitalist. How do you explain that these circles, of all people, advocate the formation of monopolies?

The desire to be a monopolist is as old as capitalism itself. Adam Smith already stated: Everyone who owns a business dislikes competition. No butcher wants a second one to set up shop nearby. That's why regulators must ensure that exactly this happens. Framework conditions must be created to ensure that competition prevails. Monopolies are just as much a part of capitalism as regulation that ensures fair barriers to entry into a business field.

There are also the natural monopolies, the water supply, for example. Doesn't it make sense for these to be in state hands and thus removed from competition and profit maximization?

They can be state-owned, but they do not have to be. With sensible regulation, they, too, can be privately controlled and thus subject to the principle of profit maximization. This also ensures that they will operate efficiently.

After World War II, shareholders and employees more or less honestly shared the profits of increased productivity. Since the 1980s, however, capital providers have benefited more and more from this development. Corporate profits exploded, while wages stagnated or, in the worst cases, even fell. Why?

This is precisely the paradox I talk about in my book. On the one hand, this was a conscious decision by the regulators. They wanted less regulation, fewer laws, and less state intervention in the market. At the same time, former state-owned enterprises were privatized without being sensibly regulated.

However, the main driver was technological change?

Yes, and regulation has not kept pace with this development. No platforms have developed where multiple providers compete with each other. That's why we have AppleStore and Google Android, for example, with unrivaled control access to these platforms, allowing them to make corresponding profits. Apple, for example, currently skims 30 percent of the revenue generated by an app on AppleStore. That's why these companies have every interest in seeing that nothing changes, and why they spend enormous sums on lobbying.

In the USA in particular, there is hardly any political will to combat monopolistic distortion of competition. The Republicans in particular have opposed stricter antitrust laws up until now.

Historically, this has been true, but currently there is a growing movement against big tech among Republicans as well.

But that's because they think Silicon Valley is a Democrat bastion.

Not only. They are also afraid that the influence of big tech has become too great.

Which brings us back to Elon Musk. Hasn't he also become too politically powerful with the acquisition of Twitter?

Unregulated social platforms should actually scare us. They have an enormous influence on the way people form their opinions. There is also the danger that the tech giants, thanks to their enormous profits, will also have the means to influence politics by supporting politicians with generous donations and thus making them dependent. This in turn makes it very difficult to regulate these companies.

How can we get out of this predicament?

I think it is still possible. But of course there is a risk that companies will indefinitely delay this process with objections.

Apple, Google, Facebook: They all started out as startups literally in the garage with the goal of conquering the world. Nowadays, the number of startups has decreased massively.

In fact, the number of startups has almost halved compared to the eighties, and it is true that the giants are making life very difficult for young challengers. Metaphorically speaking, they have hardly any breathing room left. Or they are bought up and thus taken out of the market.

Silicon Valley insiders like Jaron Lanier have been bemoaning this trend for years, fearing that it will stifle innovation.

This is precisely why we need to regulate platforms like the AppleStore and thus ensure that young startups are given more oxygen again. Under the current conditions, it has become pointless for startups to even try to get onto these platforms.

The stock market has been collapsing for the tech giants during the last few weeks, even dramatically for Facebook, i.e. Meta. Is this also an opportunity? Will this create niches for start-ups again?

I don't have a crystal ball that allows me to see into the future, and you shouldn't believe any economist who says so. But we have experienced a number of crises in recent decades. None of them has led to significant changes. The crisis, including the current inflation, affects all companies equally.

Geopolitically, a new competition is emerging in the technology sector, namely between the West and China. As is well known, China wants to become a leader in the field of artificial intelligence. Is this a healthy competitive situation - or a dangerous political development?

Economically, this is a positive development. The more who participate in the competition, the better. Ideally, there would be large global platforms to which as many providers as possible could have access, regardless of their nationality, race, etc. It should not be a concern whether these providers are Chinese, American, or whatever.

In the current political climate, such a development seems unlikely, to put it mildly. We see this, for example, by the discussion about TikTok, which is owned by China. In the U.S., there is growing fear that this app can be misused for political manipulation. Do you share this fear?

Vladimir Putin famously abused Facebook in 2016 to help Donald Trump. That was dangerous. But today I don't think TikTok is more dangerous than the other platforms.

Your desire for more and better regulation is honorable, but consumers are not asking for this at all. Henry Ford once said: "If I had asked my customers what they wanted, they would have wanted stronger horses.” Even today, consumers generally don't know what they want. So where will the pressure leading to more reasonable regulation come from?

We should not stop using our political system in a way that benefits the consumer, even when the consumer is not aware of it. At some point, this will have an effect. A vivid example of this is the change in attitudes toward smoking. Just half a century ago, many thought it was healthy. Now everyone is aware that smoking is very harmful.

The tech companies, however, want just the opposite. Elon Musk - to hopefully address him one last time - wants to turn Twitter into an American answer to WeChat, an app where you can do everything from a simple phone call to online shopping to the most complicated banking transactions. And I'm afraid consumers would love it because it will be so convenient.

It will be a long time before something like this can be realized - if at all. But should this be the case, and should all app providers then have access to such a platform and compete there in a fair way, then that would be a positive development. It would be comparable to the railroads in the Netherlands, where the state provides the infrastructure and various private providers compete with each other.

You insist on better regulation to break the monopoly power of the giants. Others are calling for higher taxes. What do you say to that?

When it comes to redistributing money, taxes are an effective instrument. Taxing excessive profits therefore makes sense. But if the aim is to address the lack of competition, then taxes are the wrong instrument. Antitrust law is much more effective. Ultimately, this also leads to a reduction in excessive corporate profits and an increase in wages. Competition can also lead to more justice.

In other words: We don't need higher taxes, but a second Theodore Roosevelt, the U.S. president who broke up the oil and railroad monopolies more than a hundred years ago?

Exactly. Politically, however, Roosevelt's math didn't work out. He lost the re-election.

Monopolies lead to high prices for consumers, low wages for employees - and excessive corporate profits. The tech giants are a prime example of this development. Economist Jan Eeckhout explains how this came about and what can be done about it.

This interview by Philipp Löpfe was originally published in German by Swiss daily «Watson», 12 November 2022. Translated and edited for layout purposes by the UBS Center.

"The Paradox of Profit" is the name of your bestseller. Elon Musk currently seems to be the perfect embodiment of this thesis. Or isn’t he? 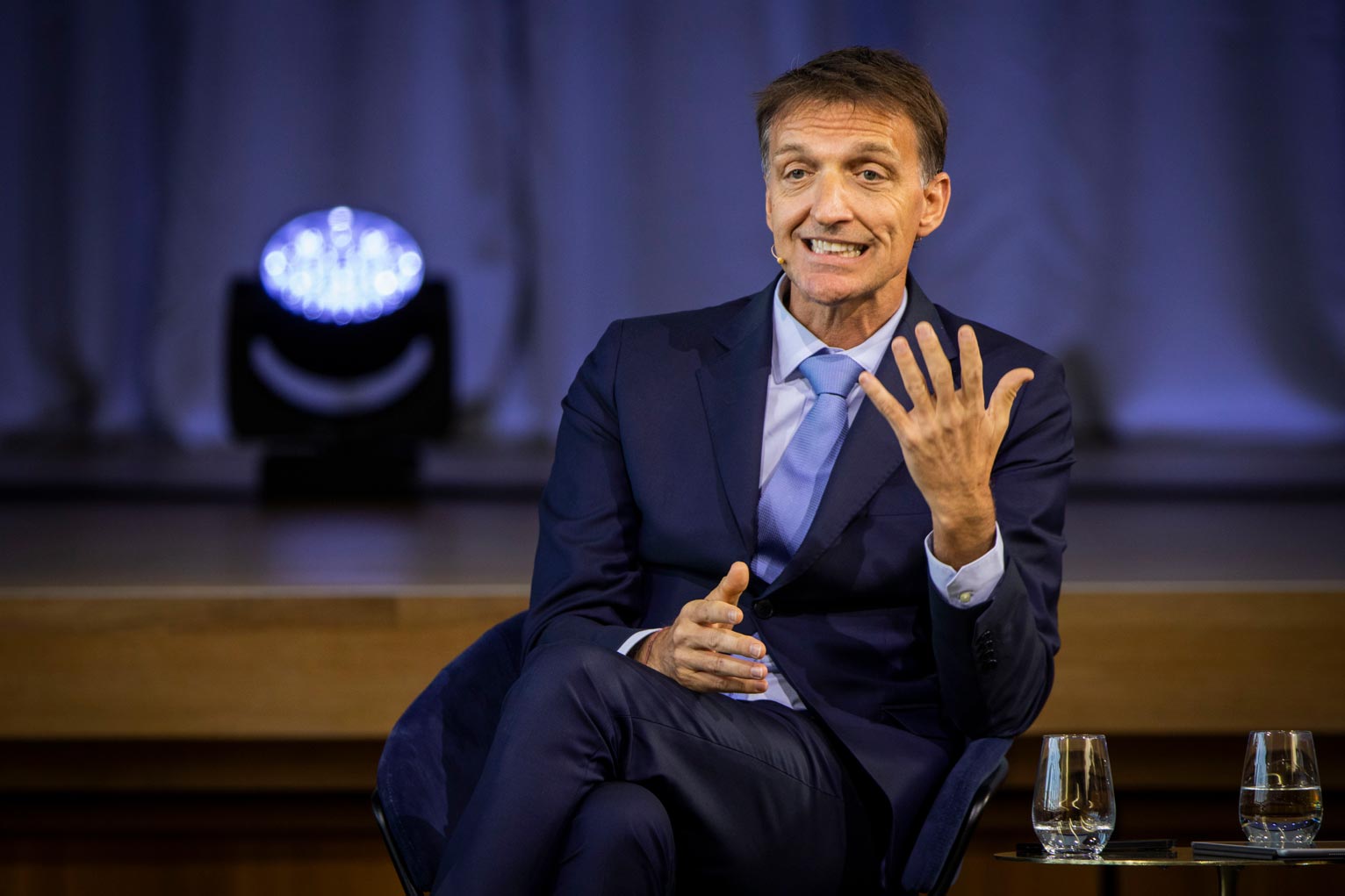 Jan Eeckhout is professor of economics at UPF in Barcelona. His book "The Profit Paradox" is a bestseller and earned him the silver medal at the Axiombusiness Book Awards. He is a specialist in market power and inequality. The conversation took place on the sidelines of the 10th anniversary event of the UBS Center for Economics in Society at the University of Zurich. (PL)

The desire to be a monopolist is as old as capitalism itself.
Apple currently skims 30 percent of the revenue an app generates on AppleStore.
We should not stop using our political system in a way that benefits the consumer.
However, when it comes to addressing the lack of competition, taxes are the wrong tool.